There’s certain words that would get you in big trouble if they were included in the title of a new book.  Unfortunately for rare book dealers, what was considered acceptable 50 or 100 years ago isn’t acceptable now.  This leaves the book dealer in a bit of a bind.  What to do with books that have racial slurs in the title or offensive cover artwork? Destroy them as hateful relics of ages past?  Hide them behind the counter?  Treat them just like any other old book?

While the safe option might seem to be to destroy them, in many ways this is worse than keeping them in circulation.  This whitewashes the past.  It sanitizes it and makes it easy to pretend certain things didn’t happen.  Things weren’t THAT bad.  Surely it’s being exagerated… (go see a larger version here.  Complete with spears and watermelons.  That the jacket itself is watermelon colors just makes it worse.)

This book is probably familiar to many people, just not with this title.  It was almost immediately republished as “Ten Little Indians” until it was determined that was also offensive and was republished as “And Then There Were None.”  The local school district has asigned this as summer reading for several years in a row. No school district would assign it with the original title. The original title is rarely mentioned in current printings.  It will say ‘previously printed as “Ten Little Indians.”‘  This means that it often ends up with a rather disturbing cover design if you DO know the publication history. 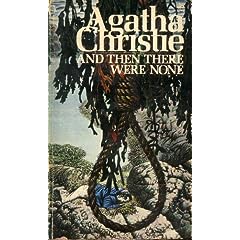 Imagine this cover with the original title. It would be yanked off every bookstore shelf in a heart beat! Pretending it never happened just creates a worse situation.

Of course the original title referred to a common 19th century nursery rhyme which was illustrated in many different editions.

This in no way forgives the use in the Christie book, but it provides context.  If all the earlier books had been destroyed, the book’s title would have made no sense.  Tossing either due to modern sensibilities destroys a bit of a the past and makes it easier to forget just WHY the term is offensive and just how pervasive racism was and still is.

Sometimes the use of offensive terms was meant specifically to shock and offend and recall that past.

The title conveys the subject matter well. You have a good feel for this autobiography just based on the title.  It would not have had quite the same impact with a more politically correct title. (and it is still is in print with this title)

Pop culture feeds upon itself, building on what went before.  Unfortunately this means that if the context is no longer widely known, people wonder why everyone is upset over recycling and old image.

Without knowing the context, recycling the “mammy” design back into wide use seems harmless.  But just because the context is more obscure doesn’t mean it’s not there, ready to blow up again.  What was acceptable even 30 years ago is no longer acceptable today.  The next generation can easily offend the last generation by recycling material that they don’t know the context for.

While these potentially offensive  items deserve to stay in circulation because of their historical and cultural significance, they do require more careful handling than your average book.  Many items can probably be put on display without issue because they’re recognized as using archaic terms that have a specific historical meaning that can’t be conveyed with another term.

Other things, well, they probably shouldn’t be mixed in with the general stock.  They may need to be kept in a cabinet or possibly online only for people looking for items from a specific era.  Keep them accessible, but not in the face of people that aren’t expecting to trip over potentially offensive material in their local book shop.  Handled tastefully they can often provide a window into the past that helps explain the presents.  They’re valuable to collectors and historians alike.

These types of books are not for everyone.  Even many dealers may feel uncomfortable handling them and feel they cannot deal with them in a respectful manner. In that case, your best bet may be either not acquiring the item at all or passing it on to another dealer to handle.  Some items are almost guaranteed to cause offense, no matter how carefully handled.  They were offensive then and they’re offensive now!

(that book is intended as a “humor” book.  a very tactless humor book, even for the time it was published)

It’s up to individual dealers to decide how they want to deal with such materials, but just because a book uses racist terms or has an offensive cover is no reason to automatically ban it from your shop.  Such items have their place. That place may not be in YOUR shop, but they still have a part to play in history.  The ugly parts of history should not be forgotten or they will come back to haunt us.