Once upon a time, if you wanted a “certain kind of book” you had to go to a certain kind of shop or order from a catalog and wait for a package in a plain brown wrapper to arrive.  With the internet, the doors have been thrown wide open and people can find any kind of book they want and have it delivered to them… for a price.  And the price for vintage erotica is often VERY high for a tiny little paperback in awful condition.

Many dealers don’t want to touch erotica with a 10 foot pole.  If you’re a specialist in a totally unrelated area, that makes sense, but many dealers find them just…. distasteful.  The content is often not significantly more extreme than a modern romance novel, it’s just packaged to highlight the sex, not the romance.

A lot of vintage and antique pornography was printed on very, very cheap stock.  These were also books that tended to be read and reread often so many fell apart.    This means the prices are quite high and the supply very limited.

Here’s some selections that have fairly typical cover art. Click on any of them to be taken to the original listing. Really, do you need to know the plot with a cover like that?  No.  Not really. The cover sells it.  Lesbians, whipping, AND Satan. 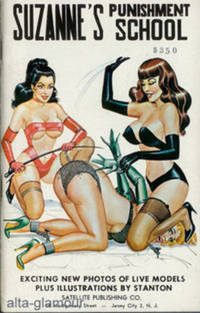 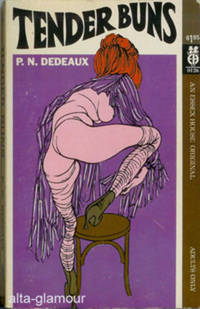 Another one featuring spanking.  Tongue in cheek (ha!) titles are common with erotica. 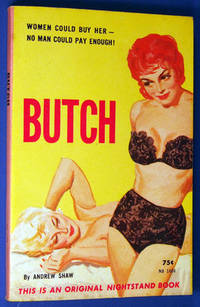 Lots of gay and lesbian titles fall into this “erotica” category, even if they contain very little explicit sex!  Vintage pulps are highly collectible.  You will sometimes see them described as “vintage sleaze”, especially if they are books featuring lesbians but are clearly aimed at men.

The price on this one also reflects that it IS actually by a well known author: Donald Westlake, writing under a pseudonym.

When erotica crosses over with another genre, things often get really strange.  Scifi is the most popular genre to cross erotica with, but others are popular.  The scifi and fantasy just stand out since it can involve alien species, like the bunny girls show here.  Titles are often parodies of other books or movies.

It’s not often that these types of books walk in the door, but when they do, they often come from unlikely sources.  Every time this type of thing has come into my shop it’s been brought in by stately older ladies wearing mink stoles who matter of factly plunk it down on the counter like it’s nothing unusual.

When one of these comes into your store, smile nicely, pretend it really is nothing unusual, and try not to giggle too loudly at the silly titles.  Even if you don’t want to personally carry erotica, odds are good you can sell it to another dealer in a heartbeat. The Anatomy of a Book