Like most booksellers , I never really thought  much about first editions until I became a bookseller.  I collected books of all sorts, had a particular fondness for antiquarian books, but I never seemed to be overly concerned about the  edition of  the book was that was in my possession – unless it was a comic book.  I collected comics long before I collected “books” .  I was genuinely interested in having an original Journey into Mystery 83 (first appearance of Thor) or an original Avengers #1, but when it came to regular books, the edition didn’t seem to matter too much to me.  When I became a bookseller that changed.

I started getting older books and started being interested first editions.  I used to get gaylords full of books which were the leftovers from a local book sale.  One day while going through a gaylord full of books I came across an old copy of “The Federalist”.  I looked it up on ABE books and found that it was not a first edition, but an  early edition (1826 Glazer edition) of this important and popular work.  The text block of the book was clean, the boards were in fair to good condition , but the binding was a bit loose. I took the book to a local bookbinder and had it resewn and had new front and rear end sheets stitched into the book. Once the book was repaired it was much more enjoyable.  You could open the book and read it without having to worry about the book falling apart.  This was one of the books that got me interested in first editions and from then on I started to pay more attention to the edition of the books that came into my possession.

One important thing to understand is that a first edition book does NOT have to be very old to make it a valuable book – first edition’s of the Harry Potter series can be very valuable , so can first editions and first printings of the Twilight series.  I would suppose that the old adage is true – you can’t judge a book by it’s cover.

Which leads me to the subject of this particular post –

One of the books that I have found to be of great assistance has been “First Editions : A Guide to Identifications” (4th edition) by Edward N. Zempel and Linda A. Verkler. The ISBN for this book is 093035818X.  This book spans 669 pages and contains statements from North American , British Commonwealth and Irish publishers on their method of designating first editions.  I consider this book to be invaluable – it is the book that I turn to the most when I am trying to determine if a book is a first edition.  This book is somewhat dated – the last edition was published in 2001, but the information contained in this book is timeless.  It does not contain statements from every publisher that was around prior to 2001, but it contains statements from most of them.  It is a good starting place to determine first editions.  If you are seriously interested in collecting or selling first editions you should get a copy of this book.  This book will guide you in determining if the book you have is a first edition.  This is a thick book and probably not something you would want to take along with you if you are out book scouting.

“A Pocket Guide to the Identification of First Editions” and “Points of Issue” both are compiled and published by Bill McBride and can be found on the web at http://www.firsteditionguide.com/.  I have used both of these volumes for years.  Both of these volumes are small enough to be put into your pocket and are designed to be taken with you when you are out book scouting.  They are both very informative and useful.  The Pocket Guide contains condensed statement summaries from a large number of publishers. The Point guide contains statements of points of issue of first editions that can help you to determine if your copy of a book is a true first edition .  I have both of these guides on my shelf and have bought multiple copies for use anyone who helps me to put books on the internet.

These 3 books are books that should be on the shelf of anyone who wants to collect first edition books for fun or for profit. 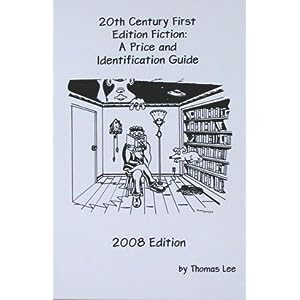 There are other more specific first edition guides with one of them being Thomas Lee’s combination guide titles “20th Century First Edition Fiction : A Price and Identification Guide / Medieval Whodunits and Other Historical Mysteries : A Price and Identification Guide ” .   The ISBN number for this book is 97809653429-8-8.  I am sure that there are many more that I have not found, but these are the ones that I use the most in my shop.  I would recommend this book for your shop.

I will continue this discussion in a future post with a discussion of some other guides that I have found to be of value.

Brick and Mortar and On the net